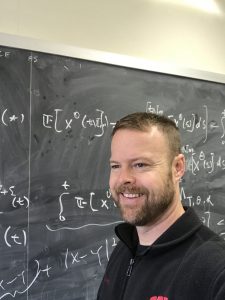 David Anderson grew up in Bridgewater, Massachusetts before attending the University of Virginia for his bachelor’s degree. He then completed his Ph.D. in Mathematics at Duke University with co-advisors Mike Reed and Jonathan Mattingly. He arrived in Madison for a postdoc in January of 2007, and became a permanent member of the mathematics faculty in the Fall of 2009. In 2018 Anderson became a Vilas Distinguished Achievement Professor.

His research lies near the intersection of mathematics, chemistry, biology, and stochastic processes. He works on theoretical problems focused on the possible qualitative behavior of models, and on algorithm design and analysis for the stochastic models found in biology.